A Snapshot of Who we are,

In the early 1900’s, W.B. Hudson came to town. He opened Citizens Bank in 1903.  You can clearly see the words ‘Citizens Bank’ over Cave’s Jewelry.

W. B. was involved politically and civically.  He saw the need for a school, so he built a one room school building, which is now our Territorial Museum.  He donated the land for Westlawn Cemetery.  The Hudsons lived at 6th and Trudgeon and raised seven boys there.  Dr. William Haynes later bought the house and raised seven girls there.

In 1906, there was a Constitutional Convention to write the state constitution for Oklahoma, before we became a state in 1907.  He was a delegate for that convention.

When the state capital was built, they asked each county to donate something from their county for the building.  The walls of the grand stairway are covered with marble donated by a bank in Henryetta.  I have not determined which of the 5 banks donated this.  However, I am betting it was Citizens Bank.

In 1905 the first school building was built at 525 W. Trudgeon.  After a larger school was built, the building was used as the first public library, The First Presbyterian Church, Boy Scouts of America, and the American Red Cross started here.  It was an early day civic center.  Later the building became the dental office of Dr. Don Washington and Dr. David Warden.

The American Exchange Bank wanted to create their drive-thru back so the building had to go.

In December 1982, Pauline Hudson, daughter-in-law of W. B. Hudson asked the Henryetta City Council for the space located south of the Civic Center on 4th Street.

In April 1983, the council approved the chosen spot and in July 1983, the building was dragged from Trudgeon to 410 W. Moore.

In 1984, Pauline Hudson was named “Henryettan of the Year”.

By September 21, 1985, the building had been remodeled, artifacts were added and the museum was dedicated and opened.

In 2003, Ed Hudson, Pauline’s son, came to town to take care of her as her health declined.  He felt if we were going to have a museum, we needed to operate as a museum.  So we joined the Oklahoma Museums Association, like 350 other museums in the state and started learning.

We used this money to remodel and repair the museum:

We replaced the kitchen floor, (I fell through).

We painted the interior and exterior of the building.

We digitized close to 2,000 Hardin Photos.

We replaced all window glass with a glass that blocked UV rays and was a strong safety glass.  This is what kept our recent vandal out of the museum.

We build a Hardin traveling display under the guidance of Todd Johnson, who digitized the old glass negatives, turning them into black and white photos.

We had over 100 Hardin photos restored and mounted in the museum.

He wrote our books that board members go by.

We have won many awards, which we still do almost annually, even though we compete with the other 350 museums of all sizes.

KFC has Hardin photo displays as their décor.

Later we were able to accomplish this list of items:

Neal’s Furniture has five of our large panoramic photos by Hardin on display.

S&L Gallery has a large Hardin panoramic on display.

Terry Bryant of Union Antiques, in Checotah is getting a large Hardin panoramic for his store.

We have Hugh Henry’s rifle, from a grandson in Florida.

We have a new set of steps at the entry porch of the museum, thanks to Lynn Prullage.

We have a new roof as of last year.

We also have displays for the glass plant, smelters, coal mines, schools, military, scouts and many more areas.

Most folks don’t realize we also contribute to the economic development of Henryetta. Before a business comes to town, one the assets they look for is a museum.

We worked with Dee Boone Days, which brought hundreds of folks to town.

We have tour buses stop by from time to time, they are always impressed with the museum.

We have been on statewide television several times.

We have a Membership Drive Dinner in March.

We have a Founder’s Day Dinner in November.

Due to our recent vandalism, we are adding exterior cameras.

Rotten wood around the building will be replaced along with the vandalized window.

Of course we still have a great deal of work to get the rest of the Hardin photos digitized and restored.

We are also working on a drive around tour of historic sites in Henryetta.  Believe it or not, We have about 60 sites so far.

We are an all volunteer group that accomplishes this.  Of course we could not have done any of these things if we had not had the continued support or our volunteers, members and donors.  Again we appreciate your being here this evening and with your continued support we will get better.

Last week a tourist called me and said, “I am from Boston and I wanted to tell you how great your museum is!”  I met with him at the Cowboy Park.  He is a retired builder and was walking the streets admiring the old fronts on the buildings before he headed down I-40.

If you would like to work with a group that works and plays well together, come join us.  One day a year, one day a week etc.  However you can help, we can use you. 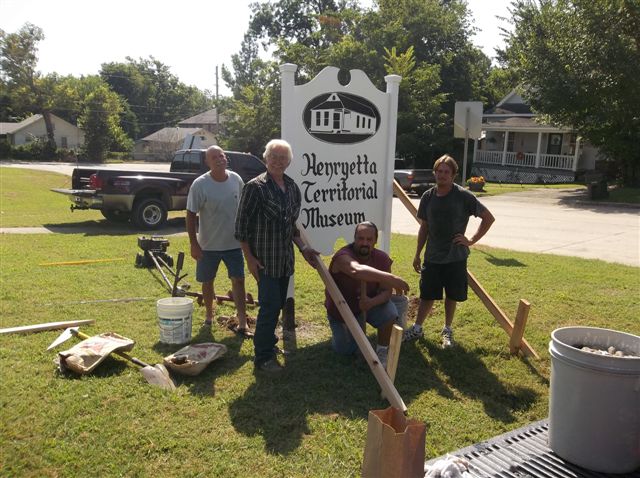